While preparing for my recent keynote at Agile Africa, I came across the work of Prof Adrian Bejan, a mechanical engineer who contributed to the field of thermodynamics through his constructal law, which is formulated as follows:

“For a finite-size system to persist in time (to live), it must evolve in such a way that it provides easier access to the imposed (global) currents that flow through it.”

Or as stated in his book

This law explains why rivers, trees, snowflakes and even our vascular system exhibit the same branching design.  It is also why hierarchies persist in human systems.  For top-down flow, a hierarchy, is the optimal design for flow.  Other than in nature though, human systems tend not to have the freedom to create fluid, evolving hierarchies.

Paul Cilliers states in his paper “Boundaries, hierarchies and networks in complex systems”   that: “part of the vitality of a system lies in its ability to transform hierarchies. Although hierarchies are necessary in order to generate frameworks of meaning in the system, they cannot remain unchanged. As the context changes, so must the hierarchies. Some hierarchies may be more long-lived than others, but it is important to perceive of hierarchies as transformable entities. This may seem to be self-evident, but I do not think that managers regularly think in these terms. They may realise that they can be replaced, but they do not often perceive their positions to be in principle provisional. They also tend to think of the interpenetrations as obstacles to efficient management, and not as vital routes of communication. “

So why is this important or interesting?  Flow is a key notion when seeking to enable strategic agility.  In the world of Lean manufacturing, optimising flow has always been central and it is becoming increasingly central in the Agile world as well.

I found it useful to make sense of this idea of flow using the Cynefin framework (please note, this is my own working hypothesis – a half-baked potato if you will, so it is not presented as gospel …).

I am fully aware these aren’t all the flows (i.e. it’s not complete) and the primary flows in obvious also exist in complicated and all of them exist in complex as well.  I.e. work, resources, information, knowledge and many others also flow in complex to which is added the idea of fluidity.  So read this as the primary flows we focus on in each domain, but not as exclusive categories. 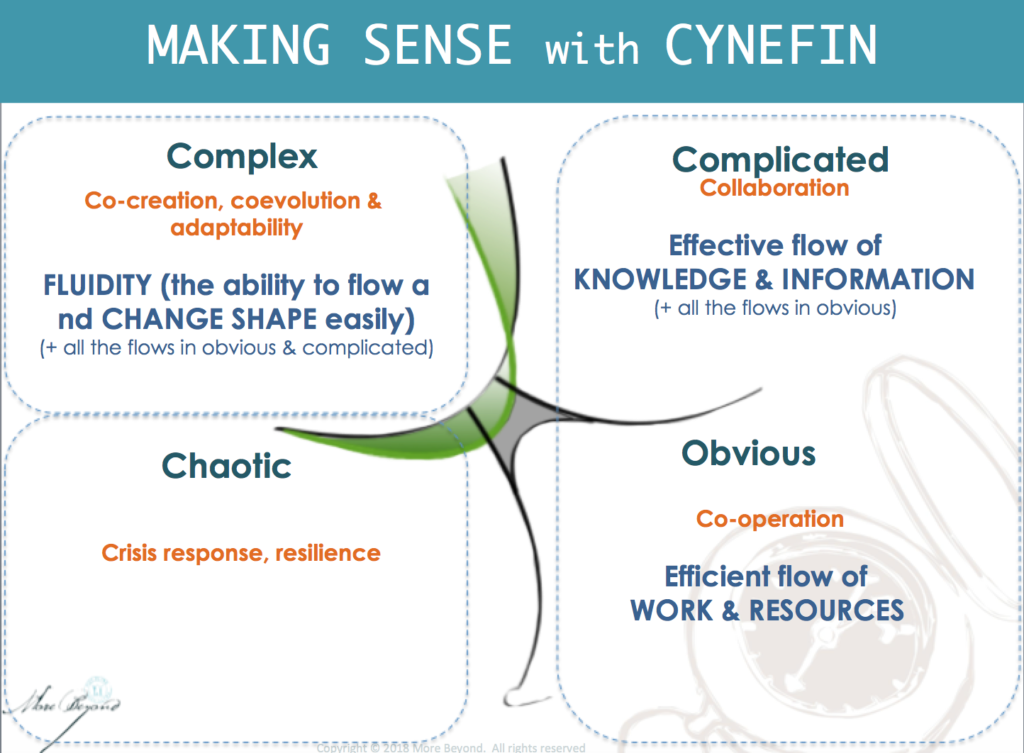 Considering only the 4 primary domains, it makes sense for me to think about is as follows: In Obvious contexts, completely predictable, repetiive routine e.g. manufacturing contexts, the primary flows are flow of work and resources. In complicated contexts, where we’re dealing with known unknowns, but where cause and effect relationships are not obvious and analysis and expertise are required, in addition to work and resource flows, we need to focus on the effective flow of information and knowledge.     These two ordered system domains exhibit linear cause and effect relationships and stable contexts, hence the focus is on efficiency and optimisation.

In the chaotic domain, it was a challenge for me to think of what needs to flow here.  A conversation at the conference led to the idea that maybe the flow that matters here is that of energy i.e. to contain the energy (emotional and otherwise) released in the chaos and ensure it flows in productive ways, not in desctructive fight/flight/freeze responses.

It is in the complex domain where it prof Bejan’s work becomes particularly interesting. My hypothesis is that in complexity, in addition to flow of work, resource and information, systems need FLUIDITY, i.e. the ability to adapt our flow processes while in the flow.  In the complex domain, the context is not stable: this is the so-called VUCA world.  It is therefore critical for the system to be able to morph it’s structure.

Constructal theory sees social structures (economies, governments, educational institutions, etc.) as flow systems that are dynamic, not static. Structure is not viewed as stable. Rather than being taken as given, the living flow structure is always in flux, ever evolving to provide better and better flow access. The evolution of flow structures reflects the interaction between time and the environment. The environment is important because it also evolves, altering the parameters within which flow occurs. Thus the environment is an essential dimension of any given flow structure. The environment, in turn, can be defined as a series of overlapping and interwoven flows that interact in space and time. I call these environments of multiple, interwoven flows “tapestries.” In nature, tapestries might be given labels such as “ecosystem” or “geomorphology,” and in the human environment they might be called an economy or society. But they share the similarity that any single flow system within the tapestry is morphing its configuration to seek better paths in the context of other flows doing the same

So then the question is how to enable fluidity.  This seems to be a key aspect of both Prof Bejan and Prof Cilliers thinking. Hierarchies must be fluid; flow systems need freedom to morph their design.  Simply focusing on introducing Lead or Agile methods at a team (or even organisational) level will not produce this fluidity.

“To truly transform an organization we must optimize the system for the flow of value, and this means looking at the whole system, and changing the whole system, if that is what is needed. ~ Nigel Thurlow, Chief of Agile, Toyota Connected

If one deconstructs the idea of agility, it seems to require three things (at least) … mindsets; practices and skills; enabling structures.  In most so-called Agile transformations the focus is mostly on process i.e training people in skills and practices.  We neglect the mindset shifts and enabling structures that are needed to facilitate a cultural shift towards agility.  Most people who’ve been through Agile training still lack a basic understanding of what agility actually is; why it’s important; and what principles the recipes they were taught is based on.    They most certainly are not more comfortable with uncertainty and ambiguity and while incentive and reporting structures remain unchanged, they are not incentivised to truly collaborate and act in the best interest of the collective.

Fluidity requires multi-directional flow, not the predominantly one-way flow that hierarchies are optimised for.  This raises the question if the current shift towards networks and structures as described in among others Stanley McChrystal’s Team of Teams is evidence of social flow systems morphing their design to optimise for the new kinds of flows they need to survive?

In nature, form follows design.  In human systems we tend to design first and then try to force flow through our designs. I believe that we need to focus on creating fluidity, not only flow and this will require adaptive, emergent organisation designs that are fit for each unique context.

So how do we start creating fluid organisations?  For now I can only offer these guidelines:

Nature does not produce optima, or “end designs” or “destiny.” Nature is governed by the tendency to generate shapes and design that evolve in time to reduce imperfection. Design evolution never ends. ~ Adrian Bejan

7 Lessons on innovation from the “lost” Steve Jobs interview

One thought on “8 guidelines to enable organisational fluidity”